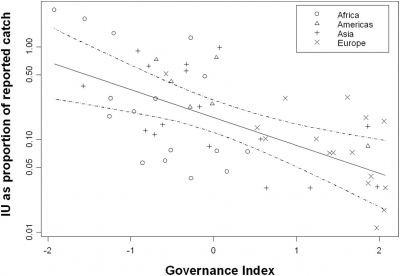 MRAG have extensive project experience on both the theoretical and practical aspects of illegal, unreported and unregulated (IUU) fishing.  In 2009, MRAG along with the University of British Columbia produced the first global estimate of the level of IUU fishing[1].  This  study estimated that the lower and upper estimates of the total value of current illegal and unreported fishing losses worldwide are between $10 bn and $23.5 bn annually, representing between 11 and 26 million tonnes and provided regional differences and showed relationships between governance indices and the level of illegal fishing.  The COBECOS (Costs and Benefits of Control and Operating Strategies) project provides another example of theoretical research into IUU fishing, where a bio-economic modelling approach was applied to a number of case studies.  In this way the optimal level of various control measures can be optimised for a proposed set of scenarios and advise control authorities on the levels of control they need to employ to reduce IUU.

On the more practical implementation side MRAG have advised a number of organisations in developing policy related to IUU.  These include the development of risk assessment methodologies, analysis of the performance and applicability of whitelists (authorised) and blacklists (illegal) by regional fisheries management authorities and port state measures.  These more practical implementations typically including desk-based research, internet based discussion for a, running workshops and the production of policy guidance documents.  MRAG have also assisted the British Indian Ocean Territory Administration in the development of reporting mechanisms for IUU that are now in place for all Indian Ocean Tuna Commission Members that allow the Members to report vessels that have been found to have committed IUU.