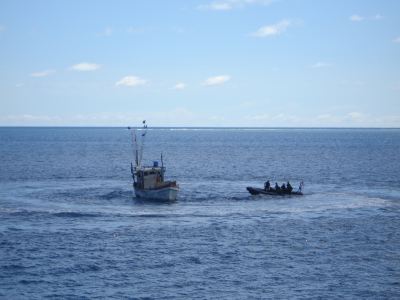 MRAG have a long history of training MCS personnel.  This ranges from developing training courses for fisheries inspectors (e.g. training of fisheries officers in Ghana) and Royal Navy officers (on how to implement ICCAT and CCAMLR inspections during their normal patrolling functions in the Atlantic and Southern Oceans) to creating dedicated MCS related modules in courses for fisheries observers.  This complements implementation work where we have provided fisheries officers for St Helena, Ascension Island and the British Indian Ocean Territory. The British Indian Ocean Territory (BIOT) Marine Protected Area (MPA) has continual coverage wih Senior Fisheries Protection Officers, trained by MRAG deployed on the BIOT Patrol Vessel Pacific Marlin year round.  Since 2011, a number fishing vessels have been arrested and found guilty of fishing illegally in the BIOT MPA, resulting in fines, coinfiscation of catch, illegal gear and in some cases the foreiture of the vessel itself, thus highlighting the successful implementation of an IUU strategy.

In addition MRAG have conducted a series of MCS training related exercises under the ACP Fish II Programme culminating in the development of a Standard National MCS Operations Manual for five ACP Countries in the Pacific that provided guidance to national MCS officers on how to effectively implement the relevant provisions from a number of regional MCS instruments.  The manual was designed with a task orientated ‘front end’ to allow an MCS officer to clearly identify what tasks need to be completed for a number of MCS elements on a daily, weekly, monthly, annual or ad hoc basis.

In parallel to the practical implementation MRAG have also conducted a number of consultancies related to deployment of fisheries personnel at sea.  A prominent recent example was the preparation of a brief to the UK Foreign and Commonwealth Office and a paper to CCAMLR on the minimum requirements for safety at sea for observers deployed in the Southern Ocean.  This work drew on the combined experience of MRAG staff over a large number of programmes and defined a number of elements of best practice that should be implemented throughout the CCAMLR observer programmes.